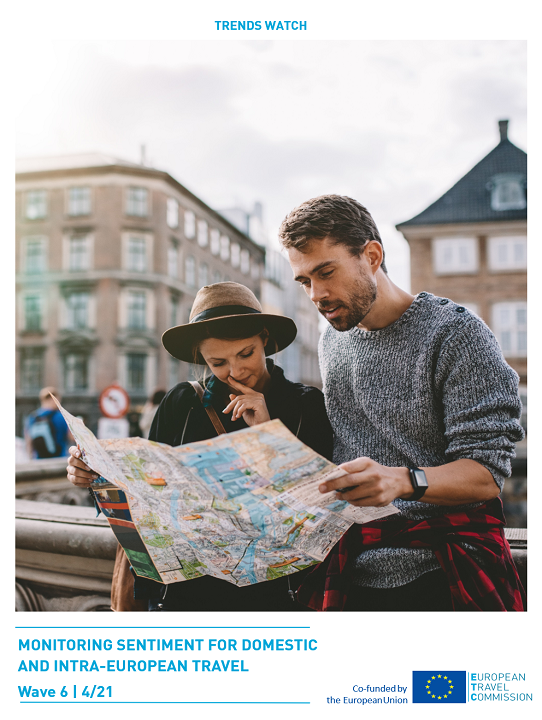 The restart of tourism in Europe: the new ETC monitor and the reborn confidence of European citizens

After facing a difficult year, European citizens are finally ready to start over. That’s what emerges from the sixth edition (dated April 2021) of the European Travel Commission‘s monitor, which examined travel intentions (for national and continental trips) of Europeans.

Confidence and desire to travel

The first important evidence of a reborn confidence can be seen in the possibility of making a trip by the end of August. 56% of respondents – there have never been such high results in previous editions, which had seen a lowest point of 49% – have every intention of doing so, while a good 22% will even move, if possible, between May and June.
Those who have not yet taken a decision, but are still leaning towards a yes, are 36%: this important portion of the sample is considering a trip by the end of the summer but has no plans yet.

The main reason for summer travel remains leisure. 66% of those who will travel this summer are doing it for pleasure. Only 19% of them will move to visit family and friends. 52% will choose the plane, while 36%, being more cautious, still prefers to travel by car.

Comparing the data with previous editions, it emerges that the confidence of the sample is clearly growing: this is also explained by a growing confidence in the success of the European vaccination campaign. In fact, 48% of the European sample said they strongly believe that the continuation (and subsequent success) of the vaccination campaign will have positive repercussions on the travel industry and the reopening of borders and facilities.

In the ETC monitor, Italy proves to be above the European average on several occasions, showing great confidence in the recovery of tourism (at least within the European borders) as early as this summer. 63.7% of Italians will be moving by the end of August (against 55% in Europe), while 59% expect positive effects on tourism from the ongoing vaccination campaigns (against 49% in Europe).

Italy is also, together with Spain, one of the most requested countries by those who will travel in the summer: 9% of the respondents chose it as their first travel preference (Spain leads with 10%).

The reaction of the sector

There are some measures that, according to respondents, tourism professionals can implement to support this confidence in the sector and make the travel recovery easier. Tourism boards will need to communicate promptly and accurately the opening of their attractions and the protocols to access indoor spaces and will also have to propose alternative and less popular itineraries, while insisting on more responsible forms of tourism. As far as agents and tour operators are concerned, flexible policies for trip cancellation clearly have a central role: flexibility is a necessity born during the emergency and people are not ready to give that up yet. 10.3% still consider them one of the key factors when choosing their destination.